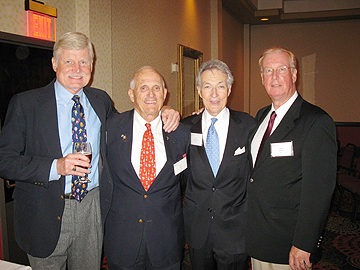 Congratulations to all of the STAG Athletes who were here earlier tonight on all that they have accomplished. How proud all of them must be to have represented such a great school in athletic competition.

Congratulations, too, to Greg and Erin for their accomplishments in lacrosse and cross country. Erin, I’m quite sure that I would not have had the discipline and determination simply to train for cross country, never mind excelling in it. You are an exceptional young woman. And to Greg’s buddies who represented him tonight…I have the greatest of admiration for all lacrosse players. Anyone who plays a game against an opponent who carries a weapon has my instant respect. Your words about your teammate and friend made me hope that I will have the opportunity to meet him one day.

Thank you to Fr. von Arx and to everyone from the university, to the Alumni Association and to the Hall of Fame Committee for this honor.

And, of course thanks to my family. My wife Melinda is here with me. She’s been my best friend for…well, a long time now…and it’s great to have two of our three children here with us. Kristen and Jim are helping to make this a wonderful night for the Connollys.

I thank you for the honor that you are bestowing this evening, but it bears some explanation. I know that this honor is not mine as much as it is that of the Fairfield Rugby Football Club’s. I am tonight representing 50 years of rugby history, and perhaps even more specifically a very select group of men. All of us in the Fairfield rugby community know that there are more deserving men and women for this individual honor and we believe as surely as I am standing here this evening that those deserving players will soon be recognized. Men from the last decade like Will Brazier and Brad Troup who have played and continue to play world class rugby, at Fairfield and beyond. Becca Ponessa is currently excelling for the women’s team. Recently she “played up” as a trialist for the local under 23 representative side. Those trialists are by definition candidates for the women’s All American Team. Way to go, Becca. And Paul Sheehy from the class of 1985 who has played at the absolute pinnacle of international rugby. After a great career at Fairfield, he continued to play for the Washington Rugby Club and represented

the United States as an Eagle in the World Cup against the greatest rugby team in the world, the New Zealand All Blacks. These Ruggers are real hall of famers!

So while I speak for them and their teammates tonight, I think, more importantly I speak for and represent a group of guys from the first decade of Fairfield Rugby. Beginning in the fall of 1963 and running through the mid-1970s. Not only did they represent the university proudly and successfully, but they created a rugby club, established a spirit and built a culture that is Fairfield Rugby. They defined what it meant to be a member of the rugby club and a part of a rugby team. I was always and am now extremely proud to be one of them. Many of those Ruggers were, most of all, great leaders. Tom “Oakie” O’Connor, Bob Murphy, Steve Carre, Bart Franey, Frank Quinn, “Gimp” Sullivan and Pete Fallon. Pete is here tonight and should be recognized as the prime mover of the founding fathers of Fairfield Rugby. Pete was the first ever captain of Fairfield rugby and is, as much as any one person, responsible for all of us being here this evening.

Every class through the decade and beyond had guys who did much more than just excel on the field. They scheduled matches, hired the referees, lined the field, washed the uniforms, organized the parties after the games, paid the bills, and generally cleaned up the mess. It was not exactly like being a scholarship athlete. Most of us “resented” when one of our best players, Tom Crowley, took a season off to play varsity basketball in 1966. Unlike the way rugby operated, he got consideration in moving classes around, time off for travel, special food in the cafeteria and…one of those really cool jackets. We were not happy! But just among all of us friends tonight, nobody worked harder at basketball or rugby than Tom and nobody deserved the perks more.

The Club over the first decade was driven by a lot of guys who gave much more than just practice and game time. But don’t get me wrong, they could play. Looking back on the mid-70s we had Ruggers like Kevin Cunningham, a line-off player and a real bruiser in the pack. Backs like Tommy Rowland – a lightening quick center who practiced every day in a t-shirt that said “Hello” on the front and “Good-bye” on the back…and he meant it – and Peter Ferraro. Petey was an electrifying player to watch, a fabulous runner and great try scorer. The class of 1973 also had not one, but two scrum-halfs who went on to play representative rugby and were the equal of any college scrum-halfs around. Bob Deerin and Tom Faranda. A year earlier we had two standoffs who also went on to play representative rugby. Although Kevin Regan was not yet playing standoff, he became a terrific player while at Fairfield and was a leader of the Essex Rugby Club in its championship season from the standoff position. And Chris Galvin, his classmate, was most deservedly our first Hall of Fame member. They were great players. Forwards like Colin Kiley, Bruce Klastow and Tom Krenn were not only terrific Ruggers at Fairfield, but went on to long representative careers. Colin became a national trialist while playing for the ERU and Tom just stopped playing rugby a couple of years ago. Tough guys, great teammates and Hall of Famers. We probably never had a better inside center and defender over a 15 year period than Tom Crowley. And when you start talking about the real old-timers, guys like the late Jay Kirwin and the late John Swanhaus, and Tom Peddicord, you’re talking about men who were not only leaders, but helped create the Fairfield Rugby culture. And to many of us from that era you can’t mention the names of Chris Grauert, Al Sullivan or Doug Ciacci without conjuring up the textbook definition of what it means to be a great player, a fabulous teammate, a great guy.

So, yes I am truly honored to be here tonight. But not to accept an award that I even remotely deserve, but rather to represent 50 years of Fairfield Rugby and even more specifically ten years, give or take, of athletes, rugby players, leaders and friends who deserve this recognition. They built a foundation for a club that is one of the most real, dynamic, vital organizations on the university campus and has been for a half century. This October over a thousand of us will be gathering on the campus to celebrate 50 years of Fairfield Rugby. Many of the people who will be there that day deserve to share in this award. I thank you for recognizing us and I thank them for allowing me to represent them.