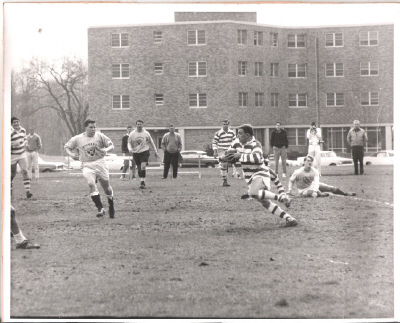 He was enthusiasm incarnate.

Whether it was yelling for us to “Rally!” outside our rooms at the Bridgeport Motor Inn in the wee hours of the morning during the 1964 Dogwood Festival (that’s him on the far right of the table looking directly into the camera), or telling us that we could kick the ass of the Columbia Old Blues “A” Team at our very first Van Cortlandt Park seven-a-side tournament (in which we had – miraculously – made it through multiple rounds to the championship game), or describing his excitement about the thought of joining another “A” Team – the Green Berets – after graduation in 1965, Doug Ciacci was an amazing bundle of energy and focused power.

An All-State halfback at New Britain High School in 1961(his arch-rival was the great Floyd Little from Hillhouse), a member of the New Britain Sports Hall of Fame, winner of the Boy Scout Medal for saving a man from drowning in an ice-covered pond while a 9th grader, co-founder of Fairfield’s Rugby Club in 1963, Doug Ciacci was not your average bear.

He was our Captain, our scrum half, and our leader.

He was 5’7″ but weighed nearly 190 solid pounds and he was fast. He ran low to the ground, a slasher with great moves. But the thing that made him most special as an athlete was that attitude: he just would not be defeated. You could watch him hyperventilate just before the opening kickoff, like a weightlifter psyching himself up for the clean and jerk, stoking the internal fires. Once a game began, he was like a miniature Great White Shark, a machine made to play ball with feral focus, his eyes like hot little coals scanning the field, seeking lapses and cracks in the defense.

Off the field, he was a loyal friend and a caring person. While his wit could carry a barb or two in it, you always knew there was no hurt intended, just the rough kiss of male camaraderie. He had a wonderful sense of humor and was capable of great depths of sentiment. While he wasn’t the most serious student, you knew that whatever effort and application he could summon would be applied to the academic challenge at hand. He loved life and made sure to live it to the fullest. He was also that rarest of combinations: the ladies’ man… and the man’s man. I’ve only met a few.

We had a falling out at one point… senior year… over something essentially trivial. There was a period of estrangement that lasted – on and off – for almost two years. And then, in the early spring of 1967… not long before the end, we both attended a party for someone at Mike Malkin’s on Manhattan’s Upper East Side. By the end of the evening, we were off in a corner, drinks in hand, pledging each other our undying loyalty, respect, and affection. I would soon be off to the Army; he was expecting to follow before too long. The Vietnam War was on and still in build-up mode, and I suspect he still had that Green Beret thing in the back of his mind.

I was in my first week of Basic Training at Fort Dix when I got the word from my Dad that Doug had been killed in a motorcycle accident on June 22nd. I can still remember sitting in that tobacco-ridden phone booth in my still-stiff, ill-fitting fatigues and inductee haircut and trying to digest the news. This simply cannot be, I thought. Anyone can die… but not Doug.

The only “good” thing about this happening while I was at Dix was not having to attend the funeral and witness Doug’s proud, hard-working father in the abyss of his grief. I’ve heard about it from those that did.

It’s all going to be forty-four years in the past this coming June. A long stretch of lifetime.

One that Doug Ciacci should have had the opportunity to enjoy.

They shall not grow old as we who are left grow old.
Age shall not weary them, nor the years condemn.
At the going down of the sun and in the morning,
We will remember them.