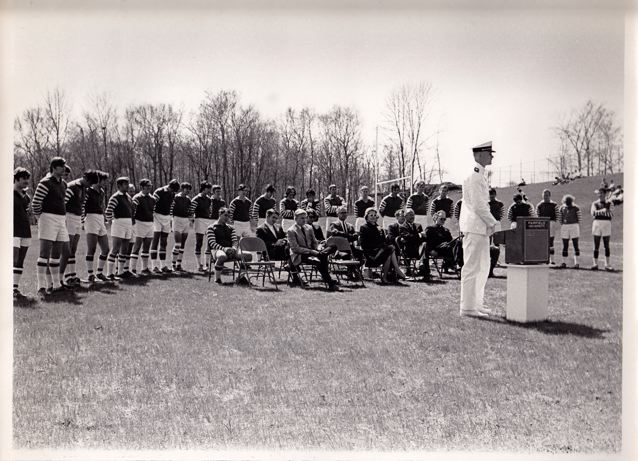 On November 3, 1967, Lt j.g. Hans H. Grauert, a Naval Aviator, launched off the aircraft carrier USS Constellation (CV-64) on a combat mission in his A-3 Skywarrior in the Gulf of Tonkin during the Vietnam War, and was lost at sea. Hans was the son of Dr. Hans and Leila Grauert of Rochester, NY, and the older brother of Chris Grauert, a Fairfield University Class of 1968 Alumnus.

Because Hans was lost at sea, the grief of his sudden loss was made even more tragic for the entire Grauert family, since there were no remains returned. In lieu of a grave, Dr. and Mrs. Grauert had an overwhelming need for closure, and considered ways to honor Hans in some appropriate manner.

Hans was a superlative athlete, particularly in soccer, so his parents in 1968 envisioned donating some sort of athletic memorial to McQuaid Jesuit High School in Rochester NY, where Hans was a 1959 graduate. Discussions with school officials, however, did not result in any acceptable ideas to establish a memorial in Hans’s memory, so the Grauerts next approached his Alma Mater, Notre Dame (Class of 1963). Needless to say, the Athletics Department of this national sports powerhouse was hardly lacking for endowments, so again discussions between Notre Dame and Dr. and Mrs. Grauert resulted in no viable ideas as to a fitting memorial in Hans’s name.

At a loss for a meaningful and appropriate memorial for Hans, the Grauerts next considered a gift in Hans’s memory to Fairfield University. Their son Chris had joined the Fairfield Rugby Club his Freshman Year in 1964 and played for 8 seasons. As he progressed through his 4 years at Fairfield, Chris’s constant enthusiasm and dedication for this sport made a great impression on his parents, and they thoroughly embraced (as did Chris) the unique rugby concepts of fair play, camaraderie, and good sportsmanship. Additionally, as Chris was elected as Rugby Club Treasurer in his Sophomore Year, Match Secretary his Junior Year, and President his Senior Year, the Grauerts became increasingly more impressed and supportive of Chris’s participation with the Club and showed their support by donating the official club stationery, as well as new goalposts for Corbett Field, replacing bent iron pipes. This track record of backing the Fairfield Rugby Club throughout Chris’s 4 years as a Red Rugger set the stage for their decision to establish a memorial for Hans at Fairfield University.

Mrs. Grauert attended several rugby matches at Fairfield to watch Chris play, and was always totally struck by the fabulous athleticism, dedication and brotherhood which was displayed by all the Fairfield Ruggers, both on and off the field. Hans possessed all these traits…he was an outstanding athlete, energetic, outgoing, humorous, friendly, engaging and a true leader. She was also very aware of the shortcomings of Corbett Field, the Fairfield Rugby Club’s home pitch on campus (now the site of the Dolan School of Business), named after Bob Corbett, a popular rugby Alumnus and one of the founding fathers of the Rugby Club in 1963. Although beloved by all the Fairfield Ruggers, Corbett Field was located on a hill, with a deep ravine extending across mid-field. It was so extreme that the Rugby Club was experiencing difficulties in scheduling home games, since visiting teams did not want to play on such unlevel ground.

With the combination of Hans’s rugger-like qualities, together with the dire need of a satisfactory field upon which to host rugby matches, Dr. and Mrs. Grauert decided to donate a new rugby pitch to Fairfield University in 1968, to be called the Lt. Hans Grauert Memorial Field. Although ironically Hans never played rugby, nor did he ever set foot on the Fairfield University campus, the Grauerts considered this gift as a perfect solution to not only establish a memorial in Hans’s name, but also to provide a permanent location on campus where friends and ruggers could meet and compete throughout the decades, enjoy the blessings of good friendships and demonstrate the wonderful zest for life that both Hans and Fairfield Ruggers have in common.

In 1968, Dr. and Mrs. Grauert commenced negotiations with Dr. John Barone, Vice President of Planning (after whom the Campus Center was later named), and Mr. Thomas Donahue, Vice President of University Relations, to site survey and design a regulation size rugby field, which would not only be consistent with the University’s growth plans, but also be beautifully integrated into the campus layout. The site chosen was behind Xavier Hall, bordering North Benson Road. Construction was commenced a few months after Chris’s graduation in June 1968. Sadly, Dr. Grauert passed away on September 2, 1968 and never saw the completed field.

The Lt. Hans Grauert Memorial Field construction was completed in time for the spring 1969 rugby season. Thanks to the sterling efforts of Fairfield Rugby Club President Bill Connolly and fellow rugger Steve Carry, who so capably managed the Dedication Committee to plan and organize the many festivities, Lt. Hans Grauert Memorial Field was formally dedicated on April 26, 1969.  In attendance were Fairfield University President Rev. William McInnes, S.J., Athletic Director George Bisacca, (both of whom gave brief remarks), Dr. Barone, Mr. Tom Donahue, Mrs. Leila Grauert, Hans’s younger brother Alex and Chris Grauert, who was granted a rare 48 hour pass from Navy Flight Training in Pensacola, FL, thanks to several requesting letters to the Department of the Navy from Fairfield University executives. In his brief opening presentation, Chris noted how Hans’s spirit was very much in evidence at his new Field, and manifested by the wonderful traditional rugby values of fair play and camaraderie.

The guest speaker at the Dedication was Mr. Edmund Lee, President of the Eastern Rugby Union, of which the Fairfield Rugby Club was a member. In an excerpt from his profoundly moving speech, Mr. Lee said:

“If you reflect on this spirit of Rugby, you will see that it is identical with – and in fact is – the spirit of life itself. This is really what rugby is all about. Lt Grauert never laced on a Rugby boot, never played a game of Rugby and never attended Fairfield University. Nevertheless, it is fitting and proper that we should dedicate a Memorial Rugby Field at Fairfield University to him. This is so because he learned at an early age, in the bosom of his loving family, to play the game of life according to the spirit of the game, and he applied that lesson religiously throughout his entirely too short stay with us on this earth. This Field will forever be a Memorial to a young man and courageous patriot who played the game in the spirit of the game, with enthusiasm, dedication and fairness, the typical traits of ruggers everywhere, and it will forever be a symbol to the truism that the game of life is won on the playing fields of a nation.”

He also noted that Lt. Hans Grauert Memorial Field was the first and only field permanently designed, named and dedicated solely for rugby within the United States.

After Mr. Lee’s remarks, Mrs. Grauert was presented a sterling silver tray to commemorate the Field Dedication, which she greatly treasured all her life.

Following the Dedication Ceremony, the Fairfield Rugby team played the University of Pennsylvania, and christened the new pitch with a thrilling, come-from-behind 14-6 victory. Tom Krenn scored the historic first points on Lt. Hans Grauert Memorial Field with a penalty kick (and was named MVP), and Mark Feeley scored the equally historic first try. Following the game, there was a reception and dinner in Xavier Hall, during which Mrs. Grauert was presented with mementos of the Dedication.

The Lt. Hans Grauert Memorial Field has meant a great deal to the entire Grauert Family since its dedication in 1969, and indeed to all the Fairfield Red Ruggers over the years, who have shown fierce loyalty and pride in their pitch.  Knowing that Grauert Field, by design, has provided a place for good friends to meet since 1969 provided Mrs. Grauert a boundless source of joy and happiness, and never ceased to warm her heart.

Mrs. Grauert remained an avid Fairfield Rugby Club supporter throughout her entire life, and always delighted in writing letters to all “her” Fairfield Red Ruggers, which were read by Chris at every one of the Fairfield Rugby Club’s 5 year reunions, until her passing in September 2008. She always lovingly and fondly called her son’s Memorial Rugby Field “God’s Little Acre”, and considered her gift of the Hans Grauert Memorial Field to Fairfield University as the most wonderful decision she made in her life.